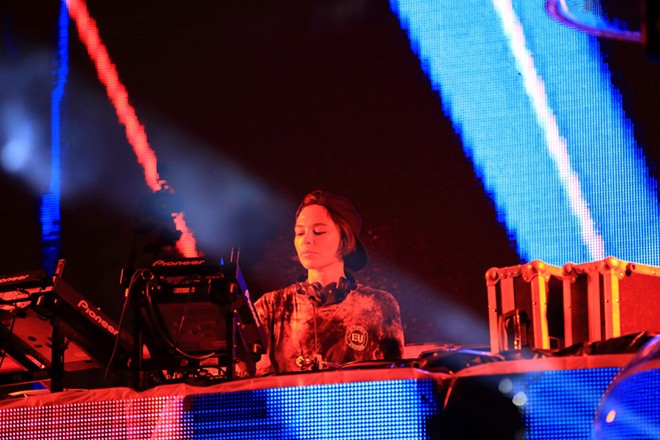 (CelebrityAccess) – Earlier this month, Rotterdam-based Clone Distribution severed ties with Trip Recordings (DJ Nina Kraviz’s label), citing “different views on ethical and moral issues.” Last week, a group calling itself “Ukrainians of Metro Detroit” launched a petition on change.org calling for the Russian DJ to be removed from the Movement.

Now Russian DJ Nina Kraviz will no longer play at three music festivals this summer, according to their announcements. PollerWiesen in Dortmund, The Crave in The Hague, and Detroit Movement all released statements via social media announcing the Russian DJ’s removal from the lineup.

The social media posts in question include a photo from 2014 showing Kraviz posing with a cardboard cutout of Russian President Vladimir Putin holding a gun with a flower in the barrel. Then, in 2016, she posted a Putin meme at a rave with the caption “don’t underestimate a Russki.” These posts were made before Russia invaded Ukraine, but the posts are still there.

Kraviz has recently come under fire for her silence on the matter. The festival announcements come a day after Kraviz posted a message on social media defending his silence on Russia’s invasion of Ukraine.

“I am a musician and have never been involved in supporting politicians or political parties, nor do I plan to do so in the future,” Kraviz said in part of the statement. “I don’t understand politics or the social processes it creates. So I don’t think it’s fair to talk about it on social media.

PollerWiesen posted on Instagram that “this decision has been made by us following an open dialogue process with all parties involved”.

The Crave wrote, “After lengthy and intensive discussions both internal and external, we have decided that Nina Kraviz will not perform The Crave Festival 2022.”

With the exception of sharing a video of a handwritten message with the word “peace” written in Russian in February, Kraviz has not spoken publicly about the Russian-Ukrainian war. But she has since done so, writing on Instagram that it’s “appalling what my country’s relationship with Ukraine has become.”

Ukrainian DJ Nastyawhich is also to perform at the Movement, said TIME she told festival organizers that she wanted to withdraw from the event and all other festivals that featured Russian artists who did not make a statement about the war in Ukraine.

Where will Spotify be in 5 years?