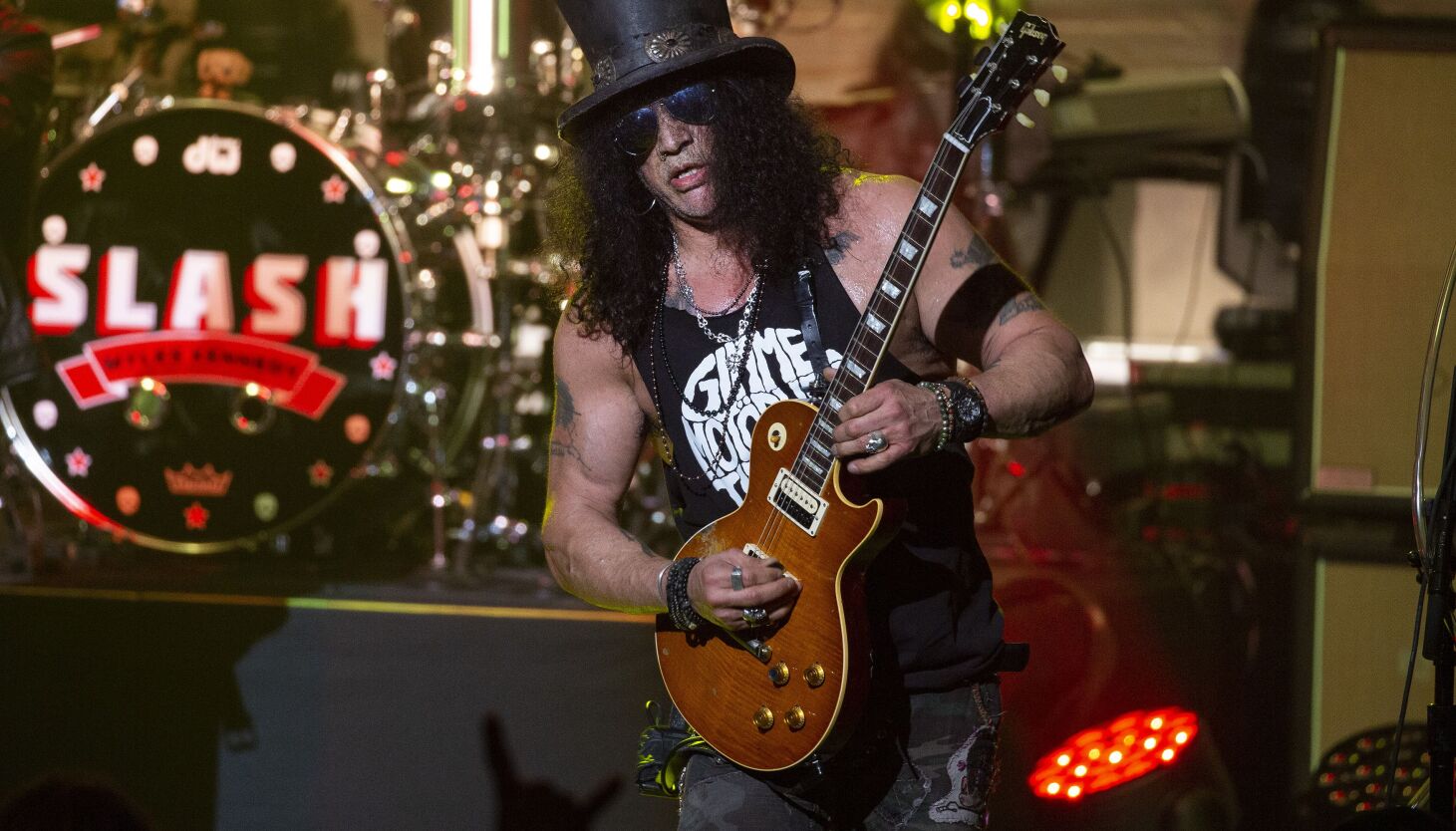 Review of Slash, Myles Kennedy and The Conspirators: A mighty, rock-solid night at the Riv

People will never get tired of seeing Slash on stage. Even though just six months ago the guitar hero was melting faces at Wrigley Field as part of Guns N’ Roses’ five-year reunion tour, that hasn’t stopped legions of fans to ask to see him again on Wednesday evening in the most intimate confines of the Riviera. This time it was for a taste of the phenom’s solid solo project featuring Myles Kennedy and the Conspirators, in support of the troupe’s acclaimed new album ‘4,’ with GNR on the back burner for the evening.

Instead of filling the setlist with rote performances of familiar rock standards, Slash and company curated a 21-song tribute to some of their best tunes. Alongside his early hits like “You’re A Lie” and “Anastasia” (with what might be one of the best, if not the most unusual, guitar riffs he’s ever written), there was a sampler platter of notable new albums like debut album ‘The River’. Is Rising” and the elegant “C’est La Vie”, which led the guitarist to break out his trusty dialogue for added effect. Even the slowed-down ballad section of “Fill My World” and “The One You Loved Is Gone” (featuring a double-necked guitar solo) was a smartphone-worthy memory, otherwise it also gave off strong “November Rain” vibes.

Wearing his top hat and sunglasses, Slash’s solo was just as characteristic throughout the night. But in this solo setting, what was great to see and hear was more blues influences that came to the fore – no more so than a smoldering offering of “Always On The Run”, the powerful song that he wrote with Lenny Kravitz in 1991 and has since dusted off for this tour, sounding just as fresh over 30 years later.

Aside from Slash’s natural musical talent, the entire ensemble shone brightly. The guitarist has always been very conscious of the musical company he maintains, whether working with Dynamos in GNR or Velvet Revolver until now Myles Kennedy and The Conspirators, with whom he has most often collaborated. since 2012. The band gets equal billing in the project. – from the backdrop to the spotlights on stage – and it’s easy to see why.

Singer Myles Kennedy absolutely shines as a frontman (a role he innocently advertised when appearing in the 2001 film “Rock Star”) with a multi-octave range that led him to try out for Led Zeppelin. Not to be outdone by Slash, he also plays a mean solo on the triangle during new track “Whatever Gets You By.” But it was a cover of Elton John’s “Rocket Man” – which the band recorded for the soundtrack to Disney’s new movie “Stuntman” – that was a standout moment for the singer.

Bassist Todd Kerns’ harmonizing vocals were also a welcome layered touch on several tracks, and when he micked for lead vocal duties on “Always On The Run” and the punk-rock-influenced “Doctor Alibi” (a Slash song originally featuring Motorhead’s Lemmy Kilmister), he held firm. There’s also guitarist Frank Sidoris who peppered each song with signature grooves while drummer Brent Fitz smoothed out the rhythm section with a steady hand. Although this project was born in the midst of a very tumultuous time for the Guns N’ Roses dynasty, it’s great to see Slash keeping it active even though GNR has officially reunited.

In fact, just as the act took the stage on Wednesday night, news was spreading that the Viper Room – the stuff of hair metal folklore where Slash and his ilk first cut their teeth – will be the latest “reimagined” victim of Hollywood’s famous sunset. Undress.

Although times have changed, Slash has always been a master at adapting to them and not getting tangled up in a set era. That’s why he transcended becoming an act of novelty and remains the icon the world knows based on his first name. As long as Slash is up, rock music will always be alive and well.

ten. “Standing in the Sun”