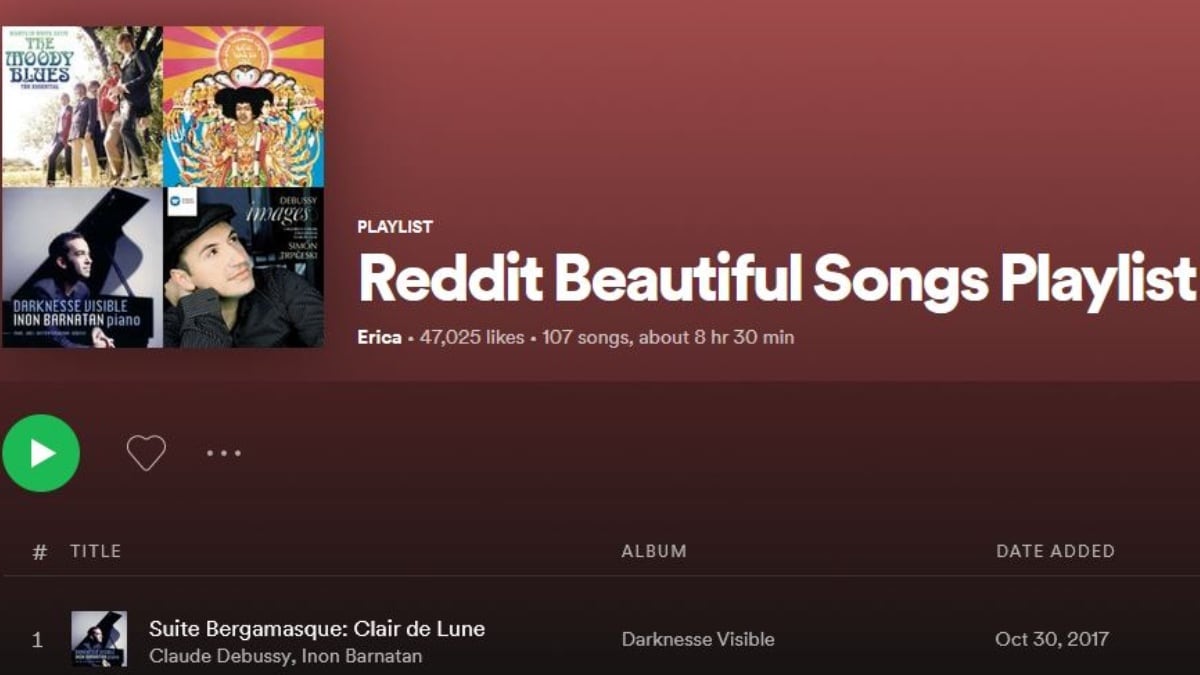 Reddit’s crowdsourced playlist on Spotify, YouTube is a treasure trove of “the most beautiful songs”

What’s the most beautiful song you’ve ever heard? This question, posed on social media, could lead to a pool of songs that have touched people all over the world. From Claude Debussy’s “Clair de Lune” to Jimi Hendrix’s “Little Wing” and Mozart’s “Requiem” to David Bowie’s “Heroes,” a crowdsourced playlist on Spotify and YouTube is thriving with songs that thousands of Redditors consider them “the prettiest” ear to ear.

In 2017, Reddit user GiveMeAllYourRupees ask the question, “What do you think is the most beautiful song ever made?” on social media platform. Unsurprisingly, the responses started pouring in by leaps and bounds. Some loved the acoustics of The Cinematic Orchestra’s “To Build A Home,” while others liked the soulful strings of Simon & Garfunkel’s “The Boxer.” John Denver’s “Annie’s Song” was also among those responses. And, just like “Time” by Pink Floyd. Elvis Presley’s “Can’t Help Falling In Love” and Louis Armstrong’s “What A Wonderful World” were also on the playlist.

Seeing the rush of responses, another Reddit user, lofabread1, made an open request: “Because I don’t really have time right now: could someone make a Spotify playlist of all the songs in this post? I would really like that.

The playlist became reality in no time. You can view the playlist at Spotify.

As mentioned, the playlist is also available on Youtube.

Milhem talks about the mechanism of action, delivery methodology and ongoing trials with RP1