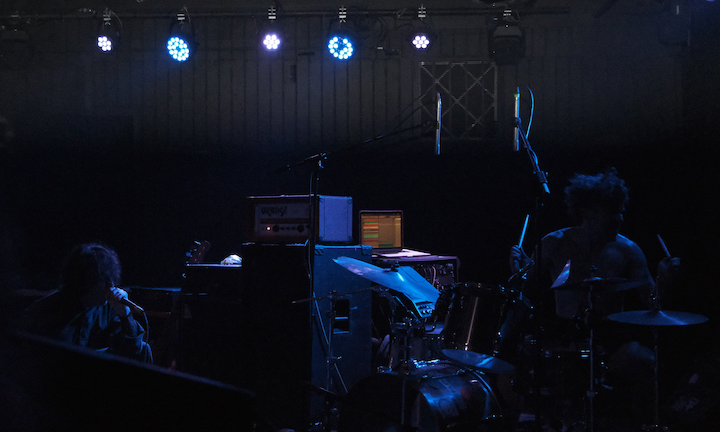 The Kansas Reflector welcomes opinion pieces from writers who share our goal of expanding the conversation about how public policy affects the daily lives of people across our state. Chad Onianwa is a writer, visual artist and founding editor of the regional newspaper.

In Lawrence, a new series of events breaks new ground, competing for cutting-edge underground acts and bringing them together with local musicians to create some truly special lineups.

In February, we saw the rubbery, sax-accented styles of local pranksters Camp Clover, the intoxicating sound and performance art of experimental Bay Area artist Evicshen and Machine Girl with their unrestrained electronic hardcore. The high-energy lineup felt a bit like a sideshow in all the best ways: dramatic, creative, and intense — a universe with its own logic that keeps you on your toes.

But most importantly, it was fun.

“I feel like I know how a good night should go,” says Wichita-raised Radius founder Austin Ellington. “But that’s because I feel like I’ve been to so many bad shows,” he adds with a laugh.

Ellington has consistently supported Lawrence and the greater area’s local music scene over the past decade. Originally working at 90.7 KJHK while at the University of Kansas, he worked on the street crew and in marketing roles with an event production company Mammoth.

Today, Ellington is a talent buyer at Mammoth, building relationships with managers and artists, scouting for talent and trying to book it in town.

Ultimately, it was Austin’s experience within local musical institutions, his “anxious in a good way” extroversion and desire to support others that positioned him to form something like Radius. A “series of progressive events” focused on dance-driven music, showcasing electronic and hip-hop acts, it is intended to expose the community to new and underrepresented artists.

As the regional college town, Lawrence supports a handful of well-established venues, a buzzing local music stage and a major college radio station. A roll of the dice any week will give you a place to see new local or touring artists. When the city’s cultural entertainment hasn’t been completely absorbed by the KU basketball matrix, live music rules.

But even given this context and a dense history of DIYpunk and alternative music to Lawrence, Radius offers more than just stylistic variety.

“Something that doesn’t get talked about a lot is the importance of the people attending an event. It’s a lot less about performers and more about people showing up and wanting to have a good time. says Kemper Robertson, also known as Kemper10ka Topeka-based producer, resident DJ at Radius, and Ellington’s good friend.

“We try to bring multi-faceted shows that aren’t beholden to any style but are always carefully curated – and that influences who comes up,” he says.

The duo want to create a space where everyone can have a “safe and enjoyable time”, in an industry where it’s easy to sweep away comfort and accessibility. It’s a goal still relevant for those working in live entertainment, but especially in the midst of an evolving pandemic.

“It was exciting to launch this brand because it’s the hardest time to launch events in our life history,” says Ellington.

During the COVID-19 pandemic, Ellington and Robertson have spent their respective time refining their ideas of how they want to present themselves in their community. Ultimately, this led to the decision to prioritize health, comfort and connection as they reassessed their relationships with work and where they chose to put their energy.

“I was particularly influenced by that time when the restrictions started to be lifted and people started to come out,” Robertson says. “I didn’t want to facilitate an environment that I didn’t consider safe or beneficial to the community. I turned down a lot of gigs. I am grateful that I had the time to reflect and make better choices for my career.

Radius is a labor of love born out of wanting something more for the local community. Robertson and Ellington actively eschew the gatekeeping that often accompanies local scenes, opting instead for a more organic approach to collaborating with local artists.

I want it to feel like anyone can get on stage if they want to. I don’t want there to be a wall between artists or Radius and whoever wants to participate.

“A lot of the people I try to bring in locally aren’t actively trying to be a professional DJ or musician, but I see them around, at shows, participating, going super hard,” Ellington says. “Like, I bet you would be really passionate about being a part of something like this!

“I want it to feel like anyone can get on stage if they want to. I don’t want there to be a wall between artists or Radius and whoever wants to participate.

This open door approach of mixing local music with touring has resulted in the most culturally relevant mix of sounds to grace local stages in recent memory. From their Halloween show featuring hip-hop artist Hook and experimental DJ Jasmine Infiniti on the same stage and more recently French producer and DJ Coucou Chloe, you could hear the results.

“It was probably our best show yet,” Ellington says. “You could tell she didn’t know what to expect coming to Kansas – a lot of touring artists don’t – but the crowd was so good! She ended up playing hours longer than expected, but everyone was so into it.

Watching videos of this show on Radius’ Instagram page, you can see crowds of attendees huddled around DJ Chloe, who is apparently out of step with the mass of people dancing around her. It’s hard to tell where the scene ends and where the ground begins.

“It’s very different from being in a room full of people you can comfortably interact with without having to hide any part of yourself.” said Robertson. “It’s something that I thought was almost impossible to do due to my experience in different places.

“But that’s so much what’s going on here. It feels good.”

Through its opinion section, the Kansas Reflector works to amplify the voices of people who are affected by public policies or excluded from public debate. Find information, including how to submit your own review, here.

Amazon Prime Brings Lizzo and ‘The Boys’ to SXSW 2022