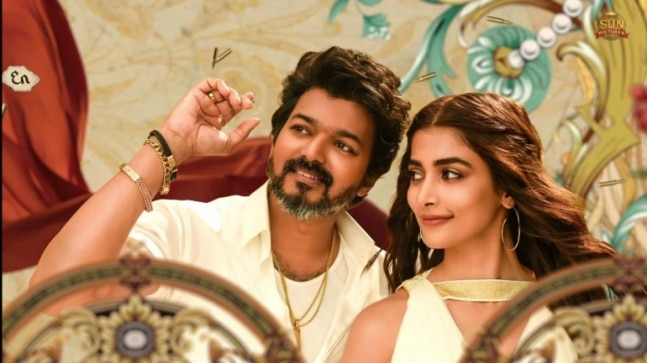 Thalapathy Vijay and Pooja Hegde set the dance floor ablaze with their steps in Arabic song Kuthu by composer Anirudh Ravichander. The song racked up over 17 million views on YouTube within 24 hours. The energetic number has lyrics penned by Sivakarthikeyan. Arabic Kuthu is a fusion song, which will appear in director Nelson Dilipkumar’s Beast.

The Arabic song Kuthu by Nelson Dilipkumar’s Beast was talked about even before its release. Thanks to the innovative promo featuring Nelson, Anirudh Ravichander and Sivakarthikeyan. On the occasion of Valentine’s Day, the creators of Beast unveiled the song.

Shortly after Arabic Kuthu’s lyric video was released, fans swooned over Thalapathy Vijay and Pooja Hegde. The energetic air, look and dance moves immediately became fan favorites. Many netizens took to Twitter to share their excitement and called them hot.

Here are some tweets:

And Pallavi Singh ma’am, bow down, the suits are crazy… They look HOT as hell@Pallavi_offl #ArabicKuthu #The beast

It’s after so long that someone looked so glamorous, cool, stylish, pretty and hot next door #ThalapathyVijay in an energetic dance number!

All points to @hegdepooja to achieve this with such ease. I can’t wait full video song #ArabicKuthu#BeastFirstSingle

The Arabic song Kuthu is already a huge hit with the public. It has had over 17 million views on YouTube and continues to grow. The catchy tune and gibberish lyrics seem to have done the trick.

here is the song:

Nelson Dilipkumar’s Beast is being produced on a large scale by Sun Pictures. The film will be released in theaters on April 14. Beast also features Selvaraghavan, Yogi Babu, Aparna Das, Redin Kingsley, and Shine Tom Chacko in prominent roles.