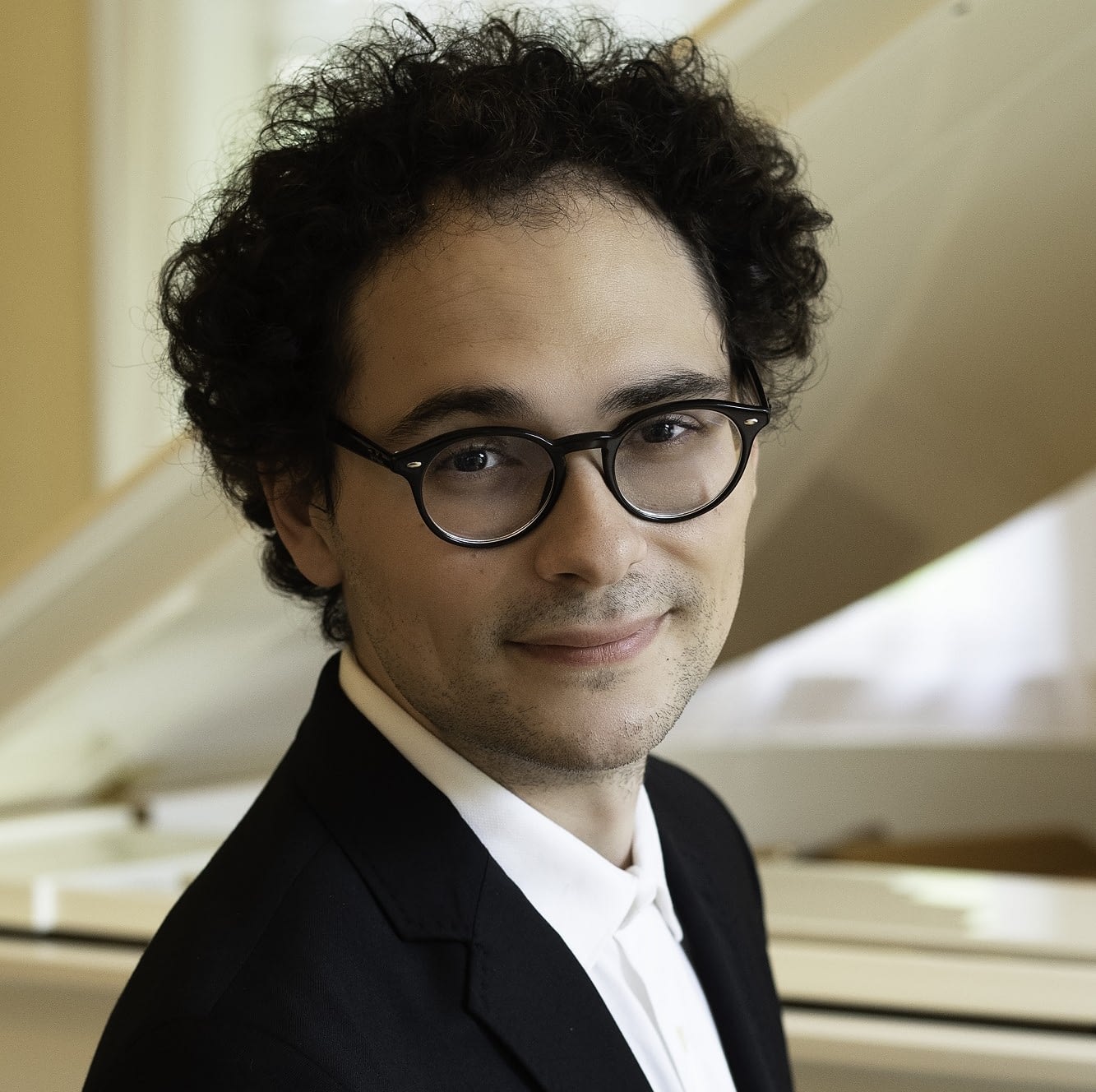 The short drama 1805 transcends its historical boundaries by telling the story of two people who risk everything to gain their freedom without realizing the depth of their ties to a sophisticated system of oppression. The story takes place on a plantation in Virginia. The aftermath of the Haitian Revolution of 1804 reverberated north into America, causing unrest among the ruling elite. The last states of the North took their first steps towards the abolition of chattel slavery. To Basammer, a slave on Mr. Corey’s Virginia plantation, that seems pretty close to freedom; and it’s a few days walk, just across the Mason-Dixon line. Together with his secret wife, Marfay, they embark on a dangerous journey that challenges both their love and their morality. Pano Fountas and his team, the 7th Floor Composer Group, were chosen from more than 100 applicants from across the United States to compose original music for Dan Jacobson’s new film. Fountas spoke with TNH about his career and the score and orchestration of 1805.

TNH: Why did you decide to pursue a career in music?

Pano Fountains: I started playing the piano at the age of 10. I remember how eager I was to learn songs quickly, to see “the sequel”. Over time, I became more and more interested in the orchestra, in the different instrumental timbres and their articulation. After I got my first computer at age 14, I got a notation program to start composing. My passion for music grew as I discovered the expressive capabilities of the piano, as well as the rich orchestral palette of classically inspired soundtracks. The music felt like a second language to the point where improvising on the piano or composing melodies was my natural reaction to emotional stimulation. I used to read novels and invent musical themes for each character or improvise pieces on life events.

During this time, my family encouraged me to pursue a more sustainable career. During my first year of studying mathematics at the University of Athens, I felt increasingly torn between mathematics and music. Eventually, I decided to drop out of college to pursue a music career. Despite all the disappointments I’ve experienced since, I’m glad I made this decision. Composing music seems like a natural extension of my personality, and I’m lucky that my work and my passion are the same.

TNH: How did you become interested in film music?

PF: What intrigued me the most about film music is that it gives you the freedom to experiment with different genres without limitation. I have varied interests and always try to combine elements from different genres to create something that is uniquely my own. On the one hand, I like the post-romantic/20th century symphonic tradition. Composers like Prokofiev, Stravinsky, Ravel and Bartok are some of my musical idols who have shaped my musical tastes. At the same time, my Greek musical heritage is an integral part of my identity. Traditional Greek tunes and rhythms were my inspiration for a piece for string orchestra which premiered at the Athens Theater in May 2022. I am also inspired by jazz, musical theater and modern music based on the production. Thanks to film music, I explore and mix all these influences to create something original, it’s my greatest joy.

TNH: Tell us about your studies at New York University (NYU).

PF: I came to the United States to participate in the screen grading program at NYU Steinhardt, which is among the best programs in our field. At NYU, I studied and collaborated with some of the best in the industry, and I am fortunate that this experience led to opportunities after graduation. For example, I was hired by NYU orchestrator and professor Greg Pliska as an additional orchestrator for a 2021 autism benefit concert hosted by the nonprofit Ability Beyond Disabilities. A month later, Greg hired me as a synthesizer for the off-Broadway show The Alchemist (the piece was reviewed by The New York Times). It is a privilege to participate in highly acclaimed productions thanks to the relationships cultivated during my time at NYU. One of the highlights of my college experience was when I received the Alan Menken Scholarship, which helped me complete my sophomore year at NYU. I was chosen from a competitive group of NYU graduate students by eight-time Oscar-winning composer Alan Menken himself, who personally reviewed my portfolio. This award was special to me because Alan’s music is part of a tradition that has deeply influenced my musical tastes.

TNH: Can you describe the process of finding musical identity in 1805?

PF: The biggest challenge for me was to find specific musical devices that support the dramaturgy of the film. There’s an abundance of symbolism and visual patterns that we had to musically support or complement. From our first conversations with director Dan Jacobson, it was clear that we needed two musical themes, the theme of hope and the theme of fear. Hope is one of the main ideas of the film. At first, the protagonists’ hope for the success of their business is bolstered by fleeting moments of freedom and joy. By the end of the film, their hope is tainted by the corrupting influence of the system they are trying to escape.

I really enjoy composing musical motifs/themes to represent characters or ideas in a story. For the Hope theme, I used a minimalist technique to develop a simple harmonic progression by interpolating chords further and further away from the tonal center. In this way, I expressed the ideal of hope and its progressive corruption throughout the film.

Mr. Corey, the vain slave owner, is the embodiment of fear, the relentless master who will stop at nothing to take back his “ownership”. As one of the other antagonists points out: “It’s not about justice; it is a matter of ownership. For the theme Fear, I was inspired by the avant-garde of the 20th century. Harmonically speaking, I used the “blues” scale with chromatic embellishments as a reference to the origins of this musical idiom, work songs and bravos.

TNH: Can you tell us about the way you orchestrated and prepared the recording session?

PF: Modern technology offers the possibility of creating realistic demos on the computer, which gives filmmakers a clear idea of ​​what the music will sound like before it is recorded with live players. The transition from the computer to the orchestra requires the composer’s interpretation to be transcribed in the form of noon to a score that can be interpreted by instrumentalists. That’s the job of an orchestrator in today’s film industry.

To compose the score, my team and I used sample libraries with various orchestral effects, which I then had to transcribe by ear. I spent a lot of time creating the proper musical notation to get the sound I wanted when recording. Careful musical preparation is the key to a successful recording, especially when the music involves many non-traditional techniques. But above all, you need players who know the extended techniques, otherwise you may have to spend part of the session explaining to them what to do, which is inefficient and expensive. Thankfully, the 22-member Budapest String Orchestra more than delivered and delivered the desired performance from the first takes.

TNH: Why a string orchestra?

PF: Our choice to use a string orchestra serves different purposes. String instruments possess a range of expressive capabilities unmatched by any other instrumental group. Considering our limited budget, this was a safe choice. Also, it was a reference to one of my favorite film scores, Psycho by Bernard Herrmann, from which I borrowed the idea of ​​using muted strings for the Fear theme.

TNH: How was the 7th Floor Composer Group born?

PF: Since September 2020, I have been working with three gifted composers whom I met at NYU. We used to meet in a walk-up apartment on the 7th floor in New York City, hence the name “7th Floor Composer Group”. Together, we have composed and produced music for films, documentaries, video games and animation. In April 2022, our group was hired to compose the music for the independent feature film Upon Waking, currently in production. I could not have imagined that working in a team would be so effective and inspiring. Coming from contrasting backgrounds, we constantly push the boundaries of compositional collaboration.

PF: I currently do a lot of freelance work. I’m a freelance composer for a Brooklyn-based production company called Found Objects and often have the opportunity to compose demos for their distinguished clients. I enjoy combining traditional songwriting skills with modern production aesthetics to create music that resonates with a company’s identity and ethos. I also work with Fight or Flight, a trailer company based in Los Angeles, with placements in several Hollywood blockbusters. One of my songs will be included in their next album, Tetra, which will be released in July.

At Hillsboro’s Library of Things, patrons can discover an experience