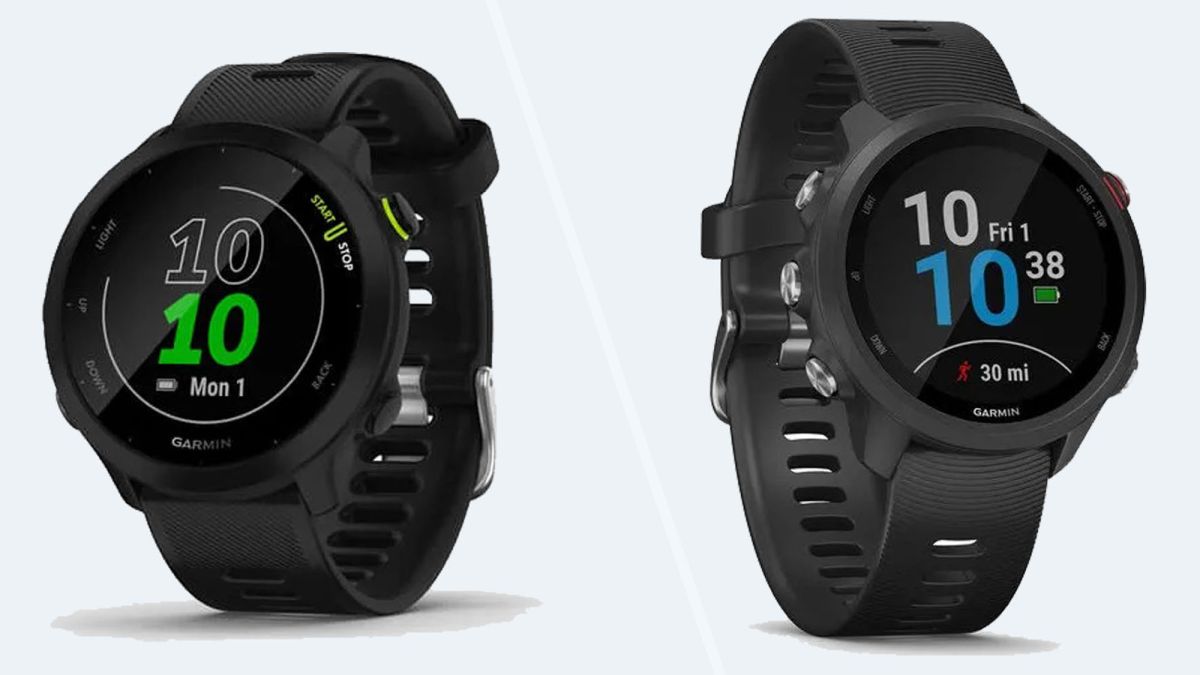 If you’re looking to invest in one of the best Garmin watches, but don’t want to spend hundreds of dollars, we’re here to help. While many of the higher-end watches in Garmin’s lineup have fancy extras like solar charging and touchscreens, if you’re just looking for a running watch that will help you stay on top of your training, show off your stats. on your run and have the option of tracking a swim or your bike ride, you probably don’t need to spend more than $300.

If money is no object, go for the Forerunner 245 because, as you’ll see below, it has more features, and you’ll likely find it on sale right now ahead of the Forerunner 255’s supposed release. That said, $100 is a lot of money, and if you’re on a budget or just into running, you’re still getting a fantastic piece of kit with the Forerunner 55.

Both screens are bright and easy to read, even in direct sunlight. They also look good on the wrist – in testing we found neither watch looked too big on the wrist, and both come in a few different colors. They also both come with a silicone sports strap, but are both compatible with Garmin’s quick-release bands, so you can swap out the strap for a metal or leather strap if you want.

Winner: Garmin Forerunner 245 – while you probably won’t notice the difference along the way, the Forerunner 245 has a bigger screen, with a slightly higher resolution

Unlike your smartphone or connected watches like the Apple watch 7, with both watches you can easily go a few days between charges. The Garmin Forerunner 55 has a slightly longer battery life than the Forerunner 245 in smartwatch mode, lasting two weeks, compared to the 245’s seven days. This is due to the higher resolution screen and the fact that the Forerunner 55 is a newer watch.

Winner: Garmin Forerunner 55 — looking at the watches side by side, it really doesn’t look like there’s much to it when comparing the time between charges. As we mentioned, however, the Forerunner 245 is an older watch, and it’s likely that battery life will be improved in Garmin’s next watch update.

Of course, the main purpose of any running watch is to track your running stats and give you live feedback to help you become a better runner. Both watches can track indoor and outdoor runs, indoor and outdoor bike rides, swimming, cardio, elliptical workouts, and yoga. They will also track your daily steps, heart rate, stress, sleep, and menstrual tracker. They also both use the same Garmin Connect app, which is a great tool and makes it easy to see all your health data in simple charts and graphs.

Both watches are able to tell you things like your VO2 max, your recommended recovery time after a run and your body battery – a useful tool that looks at your activity levels, heart rate variability and stress levels to help you see at a glance. how ready you are for a tough workout. Both also have PacePro, which prevents you from starting a race too quickly, and suggested workouts, as well as LiveTrack and Incident Detection safety features.

You can also use the Garmin Coach tool on both watches, which allows you to upload training plans to the watch. There are a number of different plans in the Garmin Connect app, ranging from a 5K to a marathon.

So how are they different? The Forerunner 55 is often seen as the “lightweight” version of the Forerunner 245, and that’s mostly because there aren’t as many advanced performance metrics on the watch. The Forerunner 245 has the ability to track more sport modes, including indoor rowing, outdoor track running, and trail running (although it lacks Pilates and HIIT modes, which are available on the Forerunner 55). You can also use Training Status, Training Load, and Training Effect metrics on Forerunner 245, which help you see how your training is progressing over time — handy if you’re working towards a running or fitness goal. distance.

The Forerunner 245 also has mapping capabilities, especially handy for trail runners or hikers. Features like breadcrumbs, which let you see where you are on a map at a glance, are useful if you regularly go exploring.

From a health perspective, the Forerunner 245 has the ability to track your Pulse Ox levels, or blood oxygen saturation. Although it sounds terribly technical, it helps you get clearer sleep data and notice conditions like sleep apnea that could be affecting your recovery.

Winner: Forerunner 245 — there’s no doubt about it, the Forerunner 245 is a better watch with more features. That said, if you’re a beginner or don’t really like trail running, we’d say you’re unlikely to use the sport modes and extra training metrics, so save your money on the cheapest watch. .

Both watches have all the basic smartwatch features we’ve come to expect from our wearables, including weather, the ability to read messages on the go, calendar reminders, and things like find my phone and find my watch.

From a smartwatch perspective, the main difference between the two watches is that if you buy the Forerunner 245 Music Edition, you have the option to download music to the watch, or listen from Spotify, Deezer or Amazon Music, and leave your phone at home. The Forerunner 245 also has Garmin Pay, which is handy when you’re on the go and don’t want to take your phone out of your pocket.

Verdict: Garmin Forerunner 55 – Again, we’d say there’s not enough of a difference between the watches to justify the extra price, especially if you’re not buying the Music Edition of the Forerunner 245. That said, if you’re trying to Whether you get a PR or hate running with your phone, the music option is handy, but for the most part the Forerunner 55’s features suffice.

That said, if you can afford it, the Forerunner 245 is a more advanced watch, with additional training metrics, trail features, and (if you buy the music version) the ability to store music on the watch and leave your phone at home. when you run. Whether or not it’s worth the extra $100 is a personal decision, but since the watch has been around for a while, you’ll likely find models on sale or refurbished for less.

Either way, both watches are a great investment and will make it easier to track your workout.