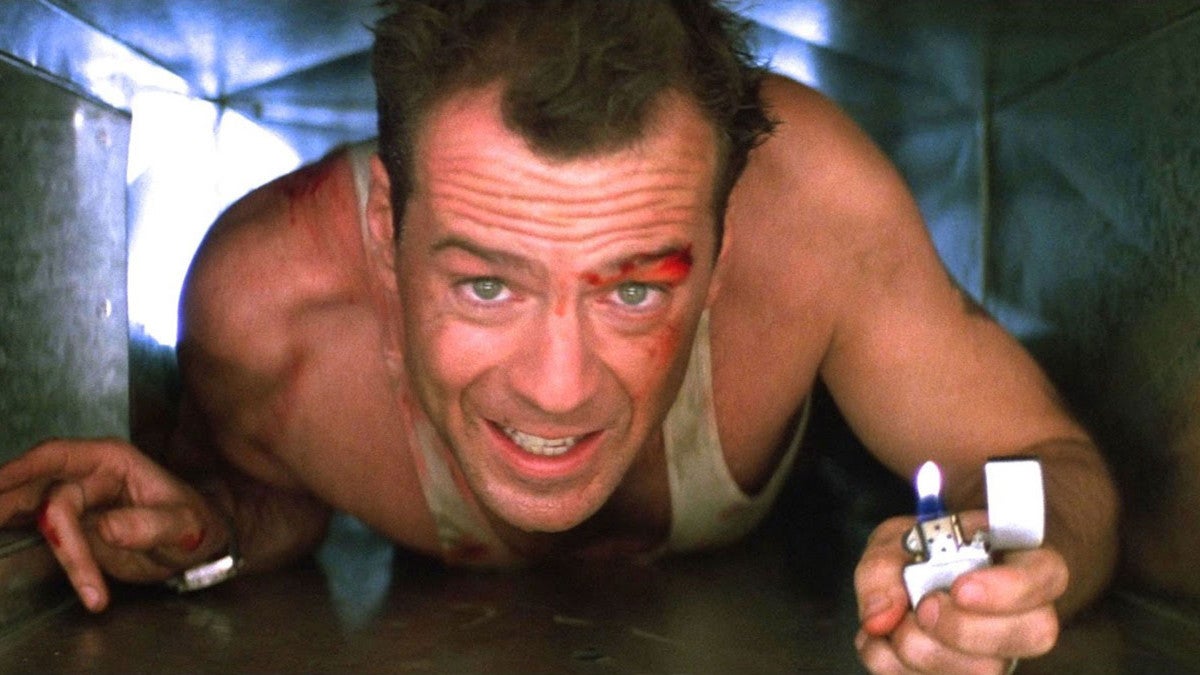 For some reason, among the crop of new movies heading to Amazon Prime Video this month, many of them are associated with the 1980s. Not just films from the Me decade, although there are certainly a handful of Reagan-era classics, but also films that look like they could have been made during that era – including a feature about raging dragons and a parody of the world of music worthy of Team ZAZ.

There’s also, of course, one of Steven Spielberg’s most powerful recent films and a ’90s staple too. Either way, this month is best enjoyed with solid access to a time machine of your choice (DeLorean not required but obviously encouraged).

Die hard with a vengeance

Ho ho ho, “Die Hard” is just as good even though it’s not Christmas time. The classic directed by John McTiernan, which is a historic action movie and easily one of the best films of the 1980s, can be enjoyed any time of the year! Revisit “Die Hard” for its delicious 80s atmosphere, the perfectly delivered banter of Bruce Willis (“Welcome to the party, mate”), and the talent and sophistication of McTiernan and his key collaborators (among them: the cinematographer Jan de Bont and composer Michael Kamen) used to bring this beloved film to life. (It was also Alan Rickman’s first film. Talk about making a splash.) It really is the best. But the third film in the series, “Die Hard with a Vengeance”, follows closely, which reunited McTiernan, Willis and Kamen and added Samuel L. Jackson and Jeremy Irons in key roles. It’s stylistically at the opposite end of the spectrum, whereas “Die Hard” was smooth and slick, “…with a Vengeance” is intentionally coarse and messy (McTiernan ordered the actors to miss their marks, forcing the cameramen scrambling to keep them in focus). Both are absolutely delicious.

Jeff Goldblum has become a truly beloved figure over the past few years, a sentiment that grows with each year and each new episode of “Jurassic World” or Disney+ show where he teaches us beans (or whatever). But why not go back to a very good performance by Jeff Goldblum, like the one he played for the masterful “The Fly?” by David Cronenberg. Seemingly a remake of a 1950s Vincent Price cornball movie, Cronenberg has evolved into a melancholic and profound meditation on the fragility of our own bodies. Goldblum plays a scientist working on a teleportation device whose genes fuse with those of a housefly, resulting in mutation and ultimately death. Geena Davis, then Goldblum’s true flame, plays the woman who loves him. At 95 minutes, there’s not an ounce of grease on this thing, and features one of John Getz’s great oily villain performances of the 80s.

Yeah, it was fun a long time ago to criticize “Forrest Gump” for being a box office titan and runaway Oscar juggernaut, especially since, in the same year it was nominated, Sharper fare like “Pulp Fiction” were also up for grabs. But Robert Zemeckis’ nostalgia-tinged slice of Americana is truly wonderful, with Tom Hanks delivering a deeply touching performance (as questionable as that may sometimes be), alongside future heavyweight champions like Gary Sinise, Robin Wright and Haley Joel. Osment. Yes, it’s cute, but it’s also a consummate pastiche, one that comes without an ounce of cynicism (which, if you remember, was very big in the 90s) and with the utmost stylistic and technological flair. (remember how great the visual effects were?) Take a walk down memory lane with Forrest and the gang.

Steven Spielberg had wanted to make a movie based on the life of Abraham Lincoln for a very long time (at one point, his “Schindler’s List” star Liam Neeson was tapped to play the president). The film he ultimately made is far stranger than the Lincoln biopic you probably imagined. Instead, Spielberg took a unique and unexpected approach, covering the last four months of Lincoln’s (now played by Daniel Day-Lewis) life as he rallied to pass the Thirteenth Amendment. (This legislation was key to his Emancipation Proclamation.) Through a crackling screenplay by Tony Kushner (based on a Doris Kearns Goodwin book about Lincoln) and spirited supporting performances by James Spader, Tommy Lee Jones, Adam Driver and Sally Field, Spielberg turns what could have been a boring story into something electric and vital. Day-Lewis deservedly won the Oscar, and the film was nominated for many others, including Best Picture and Best Director for Spielberg. In Spielberg’s hands, history truly comes to life.

One of the funniest and craziest movies of the ’80s, “Overboard” is about Goldie Hawn as a truly obnoxious, yacht-bound heiress who fucks a local carpenter (Kurt Russell). When she next falls off that yacht (this would be the “overboard” aspect of the film’s title), she wakes up with amnesia and Russell convinces her that she is his wife and the father of his gang of rambunctious boys. (She’s a widow.) Of course, over the course of the movie, the truth comes out and they end up falling in love (Russell and Hawn had been a couple since 1983). With hilarious supporting performances from Edward Hermann (as Hawn’s wealthy husband) and Roddy McDowell, who also produced the film (as butler), “Overboard” left a surprisingly big impact. In fact, it’s been remade in several countries, including Switzerland, Russia, and South Korea, with a role-reversed remake (starring Anna Faris and Eugenio Derbez) opening in 2018. But hey, it’s hard not to not go overboard for “Overboard”. ”

One of the few big-budget misses you think should have been a hit, ‘Reign of Fire’ is an upcoming summer blockbuster featuring Christian Bale, Gerard Butler and Matthew McConaughey battling dragons in post-apocalyptic England. . In a way, it’s even better than it looks, with the clever direction of “X-Files” veteran Rob Bowman (there are a handful of truly amazing sets, including one that pits paratroopers against to dragons), superb, extremely scholarly performances (McConaughey as the bloodthirsty Van Zan is particularly memorable). Plus, the dragons, brought to life by Disney’s expensive animation studio/visual effects equipment, The Secret Lab, are hugely impressive – they’re living, breathing creatures that help elevate ‘Reign of Fire’ beyond. from simple monster movie fare. Disney had high hopes for the film, including incorporating the dragons into the never-built Beastly Kingdom expansion of Disney’s Animal Kingdom in Florida. Sadly, the film failed to make a profit or leave much of an impression (although pieces of the set made their way to the Disneyland Paris resort), but it’s the kind of film that seems ripe. for a reassessment. It’s never too late to start loving “Reign of Fire.”

Dead or alive, you’re probably watching “RoboCop.” (Wait what?) Paul Verhoeven’s satirical action classic, about a hard-working Detroit cop (played by a proper robotic Peter Weller) who, after a serious injury, is resurrected as a cybernetic policeman part of a takeover of the city by an evil conglomerate, hits just as hard today. In fact, it could be even more prescient, with billionaires more willing to fly into space than solve humanity’s problems on earth, and the increasingly blurred lines between humanity and technology. If you haven’t watched “RoboCop” in a while, you’ll probably be amazed at both how funny the film is and how kick-ass it is. (Maybe a little too much, since it was originally X-rated.) Verhoeven’s “RoboCop” was so good that several sequels and a big-budget remake couldn’t capture the magic of the original. It really is lightning in a blood spattered bottle. Fortunately, watching on Amazon Prime means the second is over, you can watch it again.

It’s unfathomable that there were any traditional music world biopics made after “Walk Hard: The Dewey Cox Story.” This is how “Walk Hard” brilliantly dismantles the clichés and traps of the genre. John C. Reilly plays Dewey Cox, a country music star who accidentally machetes his brother at a young age and grows up to be a phenomenon. Over the decades he has met various famous musicians, some of whom are played by equally famous actors and others who are played by themselves (for some reason Paul Rudd, Jack Black, Justin Long and Jason Schwartzman play the Beatles). (Everyone has a great sense of humor.) Co-written and produced by Judd Apatow and directed by Jake Kasdan, it was initially considered a financial disappointment but became a cult classic in the years since. followed his exit. If for some reason you’ve never heard the ballad of Dewey Cox, now is your chance.